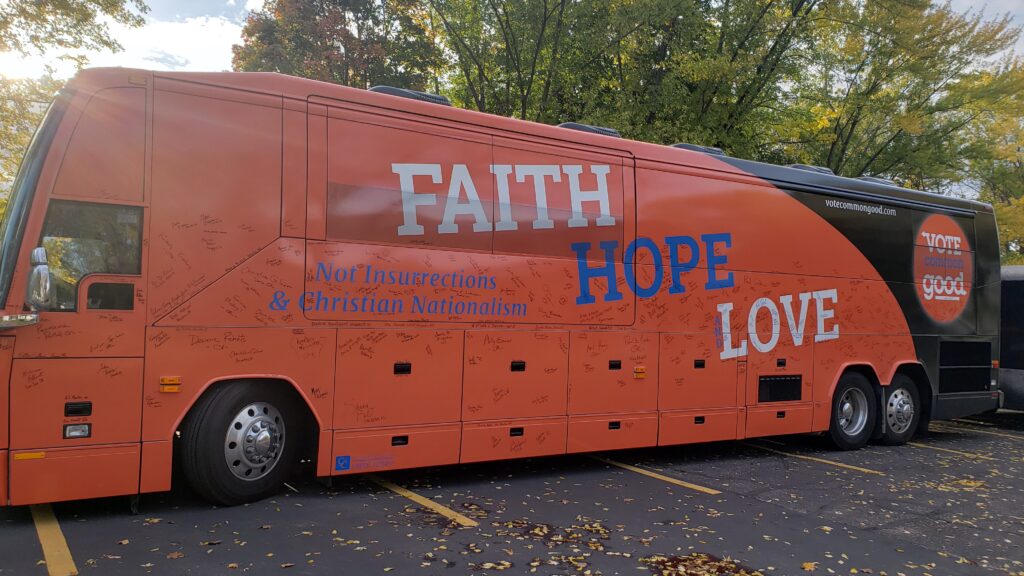 The Vote Common Good bus that the program’s presenters travel in across the country for presentations on the rise of Christian nationalism. (Wisconsin Examiner photo)

In the months leading up to the 2022 midterm elections, Doug Pagitt has been crisscrossing the country with a message for churches, politicians and voters alike about religion and politics.

Pagitt is an evangelical pastor and the founder of the nonprofit organization Vote Common Good. His warning isn’t that religion and politics don’t mix.

Instead, it’s about how they mix — and how, he argues, a particular intersection of politics and religion threatens democracy in the United States.

That intersection is Christian nationalism: a movement to impose particular interpretations of Christian doctrine on public policy, using those doctrines as their own justification and with a willingness to enforce them with violence.

“It’s the belief that the United States of America is fundamentally committed to the Christian understanding and agenda in how it runs society and government,” Pagitt says. “There’s a movement afoot among a number of elected officials who are advocating for Christianity to play a more dominant role in our government — not just in our society, not just in public discourse, but in our government.”

Pagitt, who worked for some two decades in various churches and church organizations, is also active in progressive political engagement. He has voted for Republicans and for Democrats over the course of his adult life. …