Yahoo! – I’m an evangelical pastor, and I biked 1,600 miles along the US-Mexico border. The only border crisis is America’s disgusting treatment of migrants. 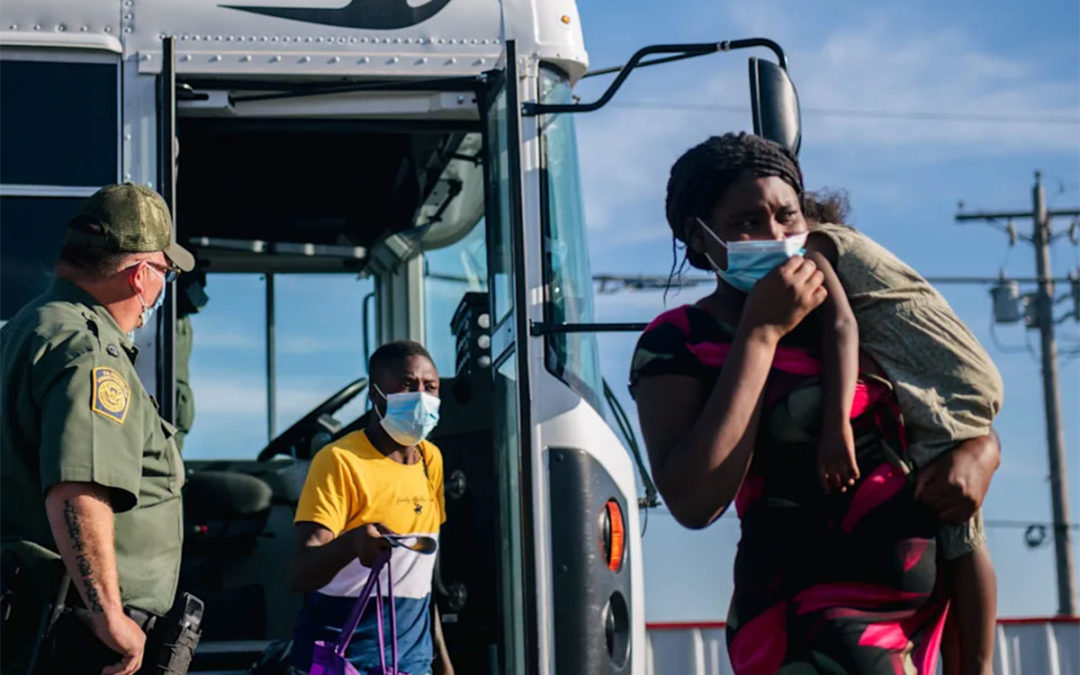 Migrants exit a Border Patrol bus and prepare to be received by the Val Verde Humanitarian Coalition after crossing the Rio Grande on September 22, 2021 in Del Rio, Texas. Brandon Bell/Getty Images

The following is an opinion written in Yahoo! by Doug Pagitt, executive director of Vote Common Good:

If you listen to certain politicians and pundits on certain network news shows, you are left with the impression that communities along the US-Mexico border are a hellscape of crime and violence fueled by malevolent immigrants crossing the border, deliberately trying to circumvent our legal immigration system. In this view, borderland communities are victims in need of saving.

But after spending five weeks biking more than 1,600 miles along the border with a group of faith leaders and activists, where I spoke with border patrol officers, ranchers, humanitarians, faith leaders, mayors, business owners, residents, migrants, and asylum seekers, I can say this picture of the situation at the border is far from the truth. There is a crisis at the border, but it is one that puts immigrants – not US citizens – in danger.

Throughout our journey, which aimed to create a better understanding of the US immigration system and the reality along the border, I asked the same question of everyone that our group met: “What do you know to be true based on living here that you wish people in the rest of the United States knew?”

One of the most common answers is that border communities are not as dangerous as they are portrayed in the media. We heard this everywhere we traveled, from people of all backgrounds and political persuasions. One day we floated along the Rio Grande River near McAllen, Texas, landing in the exact location where a group of governors held a press conference just days before in which they stoked fear about the border. The local riverboat captain we were with pointed to the place where they held the press conference and said to me, “We are here every day. What they described is simply not reality.”

The border is safe unless you are an immigrant. For immigrants and asylum seekers, it is dangerous and even deadly. The only option for entering along the southern border is to cross the Rio Grande River, climb a wall, or trek through a desert. We spoke with immigrants who told us about their experiences nearly dying in the desert of thirst as they tried to make it to the United States. We heard from others who nearly drowned with their children attempting to cross the river. Immigrants have drowned crossing the river in the very same place the 10 governors spewed their lies. We met a woman who fell from the wall and broke her pelvis, and we were just feet away when a man broke his legs from a fall off the wall in El Paso.

Why do these immigrants take such risks? Because they are left with no better options.

Since 2018, the United States has shut off nearly all asylum claims for people from Central America and more recent COVID-19 restrictions have frozen the asylum process for everyone else. What’s more, the roughly 200,000 farm worker visas that are offered each year are nowhere near sufficient to meet the needs of employers in the US or migrants seeking to work.

Meanwhile, the crisis in parts of Mexico and Central American countries is intensifying. We spoke with Indigenous women from Guatemala who needed to flee their villages because gangs were recruiting and threatening their children’s lives. We talked with a man from Honduras, who lived on a small island off the mainland that caters exclusively to cruise ships, and who was economically devastated by the impacts of the pandemic. His town had been thrust into poverty. His daughter needed surgery to correct the effects of scoliosis, so he knew that he needed to do all he could to get to the United States and earn enough money to pay for the surgery.

There used to be a way for people in this situation to enter the United States. But due to the “Remain in Mexico” policy – a Trump-era policy that is continuing under President Biden that requires nearly all asylum seekers to await their adjudication in Mexico – tens of thousands of asylum-seekers are living in makeshift camps in Mexico. This makes them vulnerable to Mexican drug cartels. All of the people we spoke with told us they not only had to pay to make their journey to the United States, but they went into debt to criminal cartels along the journey. Now they face an even more dire financial situation than when they started. The “Remain in Mexico” policy has strengthened cartels and created more human suffering.

Much of this could be solved with changes to US policy. The US must drastically increase the number of farm worker visas available from 200,000 per year to at least 1 million per year. The shortage of workers in the US demands it. The Biden administration must also immediately put an end to the Trump-era ban on asylum seekers. Once this is done, the asylum adjudication process will need to be overhauled; the US should engage thousands of former judges and magistrates to serve as asylum judges and create a system capable of processing more cases per week. The Biden administration’s plan to raise the refugee cap to 125,000 is better than the disastrous 15,000 under the Trump administration, but it does not go far enough. We need to further increase the number of refugees allowed to enter the country.

There is a crisis at the border. It’s not a threat to Americans or borderland communities, but it is a desperate gauntlet of life or death for thousands looking to escape violence and build a better life. Immigrants are not the ones to be feared – they need our help.