The Creeping Radicalization of White Evangelicals 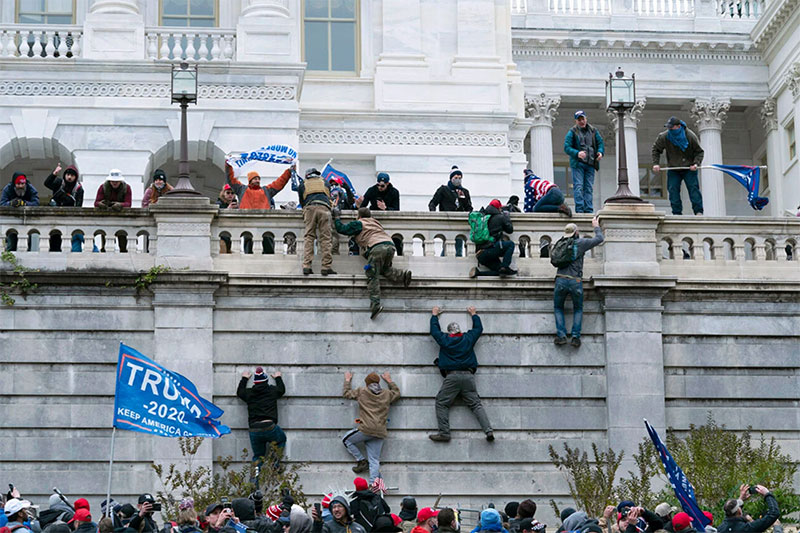 Supporters of President Donald Trump climb the west wall of the the U.S. Capitol on Jan. 6, 2021, in Washington. The mob proceeded to breach the Capitol. (AP Photo/Jose Luis Magana)

In post-9/11 America, the word “radicalization” has usually conjured images of extremists from al-Qaida or ISIS. Yet for those who have observed the steady rise of right-wing extremism in the United States, which boiled over with the violent insurrection at the U.S. Capitol that left five people dead, we need to rethink the term.

Last month the Department of Homeland Security issued a national terrorism bulletin warning of the lingering potential for violence from people motivated by anti-government sentiment after President Joe Biden’s election.

Evangelical Christians across America should be concerned about the significant role white evangelicals have played in this surge of homegrown extremism.

Since Jan. 6, some evangelical leaders have spoken out against the events at the Capitol, but many more have stayed silent. Others have doubled down on their support for former President Donald Trump, criticizing Republicans in the House of Representatives who voted for his impeachment.

U.S. Rep. Adam Kinzinger, a born-again Christian, received threatening hate mail from fellow evangelicals (including his own relatives) after he approved the article of impeachment. Franklin Graham, son of the famous pastor Billy Graham, compared Kinzinger and his Republican colleagues who voted for impeachment to Judas.

The radicalization of the white evangelical community has been creeping in for some time. Its roots are in the inextricable alliance between the Republican Party and the major branches and subcultures of conservative evangelicalism — Southern Baptists, Pentecostals and the televangelists.

In the Trump era, that integration of parishioners and partisans took an uglier, aggressive turn away from truth. According to a recent survey by the Southern Baptist Convention’s LifeWay Research, roughly half of Protestant pastors said they regularly hear people in their congregations promote conspiracy theories.

The sources of radicalization are many, and they differ across contexts, but those who research religious extremism accept that faith itself is not an indicator of extremism.

In the American context, however, race is undoubtedly a major component. Evangelicalism, and white evangelicalism in particular, has been susceptible to the heresy of Christian nationalism because its leaders have a long history of accommodating white supremacy.

Opposing this trend is a long tradition of Christian witness in this nation that has challenged white supremacy and violent Christian nationalism. During the civil rights era, while the Klu Klux Klan claimed the symbol of a Christian cross, Black Christians in Birmingham, Alabama, led a nonviolent witness in the face of dogs and fire hoses. It is time more white evangelicals in America joined this tradition.

We will have to confront this radicalization or we will suffer the consequences. That’s why I am calling on my fellow evangelicals to take a long, hard look at the direction that many in our community are headed. We cannot afford to ignore or dismiss the most extreme elements, which are growing. To do so would not just put our fellow Americans and our democracy at risk; it would mean the degradation of our faith.

What Kinzinger tweeted on Jan. 12 rings true: “(T)here is a huge burden now on Christian leaders, especially those who entertained the conspiracies, to lead the flock back into the truth.”

That’s why, this week, along with nearly 1,000 evangelical luminaries, I signed an open letter calling on pastors and evangelical faith leaders around the country to join together in a concerted effort to root out radicalized Christian nationalism from our communities.

Signers of the letter represent a wide spectrum of political and theological leanings. They include conservative, Southern megachurch leaders as well as prominent evangelical names like Jerushah Duford, a granddaughter of Billy Graham.

The letter is just the start. Signers of the letter continue to hold virtual meetings to discuss the need for new initiatives to address extremism in the white evangelical community. What is clear is that there is no one-size-fits-all. What will work for one church won’t necessarily work for another. But the common thread throughout is that faith leaders have to lead.

Evangelical leaders have to make it clear in our sermons and in our interactions with members of our community that racism, Christian nationalism, conspiracy theories and political extremism are at odds with the teachings of Jesus Christ. They are heresy. Then we need to open our arms and create space for those who have gone astray to return to the righteous path. We can’t just tell them what not to say or do — we have to open the door to an alternative.

Evangelicalism calls on us to live out our faith actively. Those who have become radicalized in our community are doing so, but they are actively destroying our faith and our country. It’s time the rest of us start actively engaging in the hard work of de-radicalization and working to ensure future generations don’t stray so far from the path of truth.

This is part of a regular series by Doug Pagitt, Executive Director of Vote Common Good, for Religion News Service.