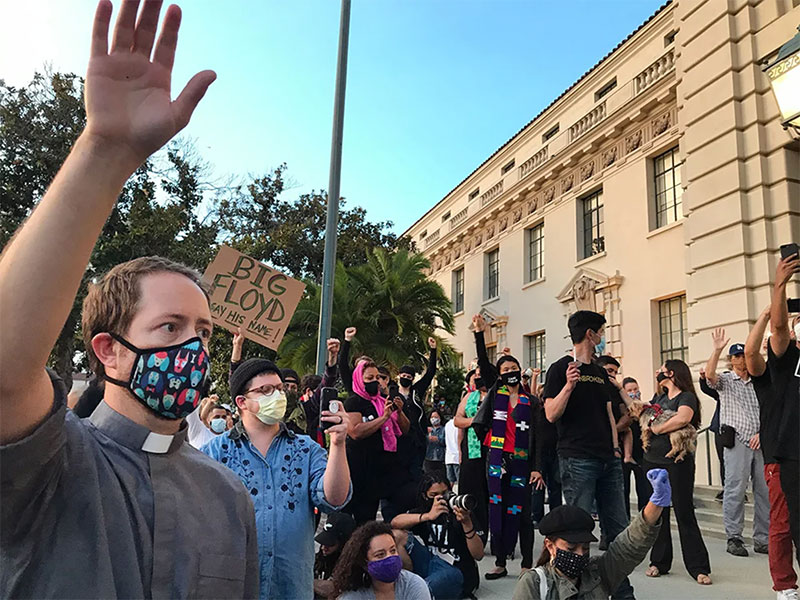 The Rev. Zachary Hoover, left, is with LA Voice, a multiracial and multifaith organization that planned the May 31, 2020, evening vigil in remembrance of George Floyd in Los Angeles. RNS photo by Alejandra Molina

The following is an opinion written in Religion News Service by Doug Pagitt, executive director of Vote Common Good:

The wave of demonstrations following the murder of George Floyd a year ago may have marked the largest unified movement in United States history. Polling suggests that anywhere from 15 million to 26 million people took to the streets, demanding accountability for Floyd’s death, a major restructuring of our criminal justice system and an intentional, nationwide push for racial equality.

But while people from all walks of life came together to fight for Black lives, the white evangelical community was largely absent.

I am a Minneapolis native, local business owner and founder of a church community called Solomon’s Porch, and Floyd’s death hit close to heart and close to home. My family and I have taken long walks around the very lake that Floyd and his girlfriend, Courteney Ross, frequented.

These connections made it all the more disappointing to see the distinct lack of organizing from our local faith leaders following the murder of a member of our community. When local Christians gathered to march to demand justice for Floyd, we were told by some evangelical leaders to remain silent during the march, and to refrain from posting about it on social media.

Evangelical values — the need for justice, loving thy neighbor and fighting for the common good — are deeply intertwined with the demands of the Black Lives Matter movement, but we have failed to show up in solidarity for this moment of grief.

Despite the Christian belief that all human beings are created equal in the image of God, I’ve seen conflict between white Christians who support Black lives and those who apply selectively or warp the teachings of the Bible to justify turning a blind eye or, worse, justify the status quo of police brutality and systemic racism.

A dear friend recently noted, “The faith community is seen as arriving late, leaving early, and bringing ulterior motives to the protest.”

Even those Christians nationwide who have preached the right values have failed to mobilize when called upon to defend innocent Black lives. I have met countless well-intentioned evangelical leaders who feel as though it is not their position to be involved in protests and marches, despite being keen to show their support. Worse yet are those who are conservative when it comes to policing women’s bodies but suddenly become moderates when they are asked to take a stance on BLM.

The Rev. Martin Luther King Jr. denounced white Christians for their relative silence in the face of racial injustice in the 1950s and 1960s — a fact many conservative religious leaders ignore today even as they claim the church’s devotion to the civil rights movement.

But from his Jefferson County Courthouse cell in Birmingham, Alabama, King wrote, “I felt that the white ministers, priests, and rabbis of the South would be among our strongest allies. Instead, some have been outright opponents, refusing to understand the freedom movement and misrepresenting its leaders; all too many others have been more cautious than courageous and have remained silent behind the anesthetizing security of stained glass windows.”

Christians did come to play an important role in the advancement of Black rights in America. Hundreds of clergy members joined King during his march from Selma to Montgomery, among them James Reeb, a white Unitarian Universalist minister, who was brutally killed by white segregationists in Selma. But Reeb was an exception, not the rule.

Indeed, the apartheid regime in his native South Africa claimed theological justification for its white supremacy and found support in a number of white, Christian denominations worldwide. While Christianity played a significant role in the democratization of South Africa, the Christian activists who fought apartheid were largely people of color.

There have been some encouraging signs of a conservative conscience developing on these matters. Texas televangelist Joel Osteen, normally considered apolitical, marched in a BLM rally last summer. J.D. Greear, the president of the Southern Baptist Convention, a denomination that began as the church of Southern slaveholders, has publicly declared that Black Lives Matter.

To be a Christian on the wrong side of this issue is to exalt the politics of the profane above the virtues of the sacred. We have a moral duty to fight for what is right, not to continue to pick and choose which political issues we will marshal our immense organization and resources behind.

White evangelicals have a deep history of turning away from issues pertaining to racial and economic justice. What little taste for social justice and religious community we had has been boiled away by a partisan, right-wing agenda. It’s high time for white evangelicals to break with history and stand against racial injustice.

The onus falls solely upon us to rebuild confidence and trust. We may find tension as we take our first steps, but discomfort is a necessary precursor to change, and not knowing how to get involved or what to say is not an excuse for silence.

This should be a moment of learning for white evangelicals, one that will take time, as we build our understanding of the Black experience, reckon with our past, repent and reconcile. But our community has a responsibility, a moral obligation to support Black lives.

I encourage all pastors and clergy members to break the separation between religion and social justice, and show BLM organizers and the Black community that we are willing to put in the work to be on the right side of history.