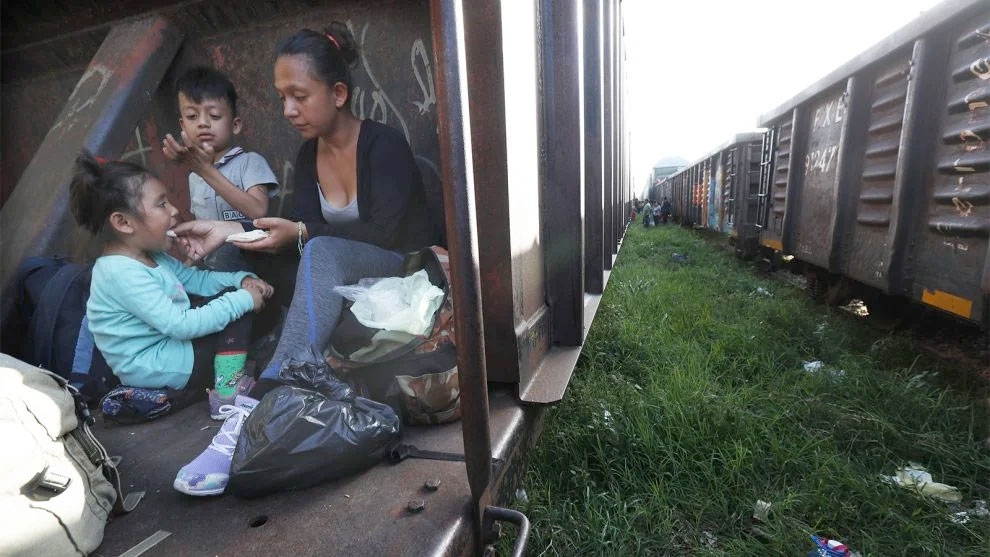 A migrant mother and children ride a freight train on their journey north to seek refuge in the U.S., in Palenque, Chiapas state, Mexico, on June 24, 2019. (AP Photo/Marco Ugarte)

For generations, members of the Christian tradition have told stories of wayward travelers, refugees fleeing persecution and migrant peoples traversing country borders in pursuit of a better life. Mary and Joseph themselves fled to Egypt with the infant Jesus to protect him from King Herod, according to the Gospel of Matthew. Presumably they were not impeded by an 18-foot border wall on their trip from Bethlehem.

How we should act toward these travelers is laid out in passages such as Leviticus 19:34, Zechariah 7:9 and Jeremiah 22:3: It is our religious duty to treat immigrants with kindness. In his Letter to the Galatians, the Apostle Paul tells us that we should ignore national boundaries: “There is neither Jew nor Greek, there is neither bond nor free, there is neither male nor female,” he writes, “for ye are all one in Christ Jesus.”

While we can’t expect the government to do the work our faith calls us to do, U.S. immigration policy is, to Christians, a religious issue. Our faith demands generous compassion for those in need — that we care for our neighbors as we care for ourselves. With a 250 million-strong Christian base, it’s a wonder that our country does not employ radical open-border policies.

One group of Christians in particular consistently misses the mark in viewing immigration policy through a Christian lens. A 2018 PRRI poll of more than 2,500 American adults concluded that 75% of white evangelical Protestant Republicans, the highest percentage of any Republican group, believe immigrants are invading American society.

And a PEW research poll also found that 68% of white evangelicals believe the United States does not have a responsibility to house refugees — a significantly higher percentage than the national average.

This is especially startling when contrasted with polling from March 2013, which found 56% of white evangelical Protestants supported a path to citizenship. This begs the question, are evangelical voters nationwide having a crisis of faith, or are they simply allowing the politicization of immigration policy to cloud their Christian duty?

My colleagues and I at Vote Common Good recently traveled to the U.S.-Mexico border in search of the truth. It was in looking past the countless articles, data points and Democratic and Republican narratives that we found families — our neighbors — waiting for deliverance. A single trip to the border has humanized my entire outlook on our nation’s immigration policy.

At a shelter near New Galas, Mexico, I spoke with five women from Mexico, Honduras and Guatemala. They shared their individual stories of poverty, danger and civic unrest that led them to the border. Each noted that God had sent them on a mission to protect their children. They looked to us, a group of pastors and other people of faith, for assistance. I was heartbroken to be unable to provide immediate relief.

I ask evangelicals to reflect on the following: How can we fight for religious freedom while upholding regulations that stop people from fulfilling God’s calling? Any one of us, if called upon by God to protect our family and seek immediate asylum, would obey.

Our group was not alone at the border. Countless faith leaders have traveled to immigrant shelters to offer their support. Most claim that they’ve been called to this work by God and by their Christian duty. Our moral obligation to help our neighbors is being too easily overshadowed by Republican demands for “law and order” and xenophobic fear mongering.

Most Americans favor a common good approach to immigration policy, one that welcomes immigrants, refugees, asylum seekers through a clear, fair, accessible path to migrate to the United States. This was apparent just last week, when thousands called on the Biden administration to resettle the Afghan Special Immigrant Visa program applicants fleeing newly Taliban-occupied Kabul.

The common good means recognizing that this country does not belong to a select number of Americans. Our Constitution’s preamble begins with “ We the People ”: We, the people, are a nation of diversity with the largest immigrant population in the world. This remains our greatest strength. Just 2% of our population identifies as Native American or Alaska Native; the other 98%, it might be argued, have no greater claim to this land than the immigrants seeking to cross our borders today.

Religious leaders have immense influence in their communities. While I do not expect an immediate change in tone from Republican evangelical leaders on issues of immigration, I call on them to join us in traveling to the border and bearing witness to those being detained.

Vote Common Good’s 3,200 mile bike ride along the border from San Diego, California, to St. Augustine, Florida, departs Sept. 10, and all are welcome to join.

During our travels, we will center the stories of those most impacted by U.S. immigration policy and share their experiences and treatment widely. We will look to those living on the border for answers, opportunities and changes to immigration policy, while connecting and learning from immigrants to deepen our nation’s understanding and ability to call for just action at our border.

It is our Christian duty to fight for fair immigration policy. In traveling to the border, we hope to remind the public that immigration is a human story and encourage our nation’s 90 million evangelical voters to view it in this Christian light.