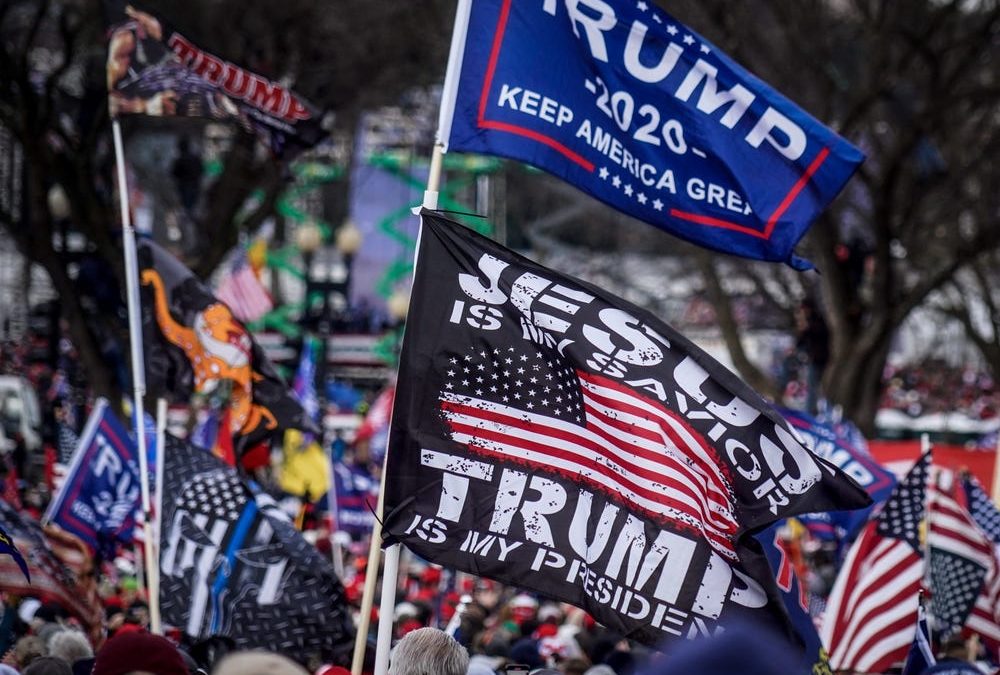 Christian flags and symbols were prevalent at the January 6 Capitol attack. Selcuk Acar/NurPhoto via Getty Images

The following is an opinion written in Business Insider by Ani Zonneveld and Doug Pagitt, executive director of Vote Common Good:

With the Senate’s decision to acquit former President Donald Trump, it seems that Trump will not be held immediately accountable for his actions that led to the January 6 insurrection at the Capitol. Yet the extremism that led to the insurrection runs deeper than Trump, and it can and must be addressed regardless of what consequences Trump suffers.

Today, right-wing extremism is arguably the biggest terrorist threat facing America. Recent warnings from the Department of Homeland Security confirm as much. And similar to violent extremist movements throughout the Muslim world that have come into focus since the 9/11 attacks, the growing right-wing insurgency in America is entangled with religion.

At the Capitol riot, the presence of Christianity was undeniable. Footage shows insurrectionists inside the Senate chamber praying at the Senate podium. They held signs reading, “Jesus 2020,” a white cross declaring “Trump won”, and marched through the halls of Congress yelling “The blood of Jesus covering this place.” Many of the rioters were participants in the Jericho March earlier that day.

What is crucial to recognize is that although the mob at the Capitol may have lacked any centrally-organized leadership, the movements that fostered the extremism on display do rely on leaders. And just as Muslim heads of state and Imams around the world have been expected to condemn the acts of terrorists, Christian leaders in America should now be expected to condemn the extremists of Christian nationalism and work to root out extremism from their communities.

Statements of condemnation are not enough

Although some Christian leaders have spoken out against the events at the Capitol, many more have stayed silent. Others have even doubled-down on their support for President Trump, criticizing Republicans in the House of Representatives who voted for his impeachment. GOP Rep. Adam Kinzinger of Illinois, a born-again Christian, received threatening hate mail from fellow evangelicals. Franklin Graham, the son of the famous pastor Billy Graham, compared Kinzinger and his Republican colleagues who voted for impeachment to Judas, the biblical disciple who betrayed Jesus.

Taking a strong vocal stance is important, but no one should be under the illusion that statements of condemnation are enough. As Muslim communities around the world have learned in the decades since the 9/11 attacks, successful deradicalization efforts require sustained, grassroots engagement at the community level. This means Christian leaders who object to the kind of violent Christian nationalism that was on display at the Capitol need to start doing the hard work of pulling their flocks back from extremism.

Like Muslim extremists, Christian extremists harbor a theocratic worldview, in which they believe their values are superior and they must upend the balance of power and impose their beliefs by any means necessary. They believe the ends justify the means.

Christian nationalists like GOP Sen. Josh Hawley of Missouri and the extremists who find inspiration in his words do what they do because they think it will help them gain the power they need to make the changes they believe will make society better. But for Christians, immoral means should never justify moral ends. The teachings of Jesus could not be more clear: followers of Christ are supposed to live their lives a certain way and be a certain type of person — not achieve certain ends. To ignore that crucial precept is to miss the forest for the trees.

Faith is not the only factor

In the Christian context, as is the case in Islam, faith itself is not to blame for extremism. As a evangelical Christian pastor and a Muslim activist, we both believe this to our core. Although they are not the sole source of extremism, we have to recognize the way corrupting ideologies often merge with and sometimes supplant theology.

QAnon is a perfect example of an ideology that has become an accelerant in conservative Christian communities that foster right-wing extremism. According to a recent survey by the Southern Baptist firm LifeWay Research, roughly half of Protestant pastors said they regularly hear people promote conspiracy theories in their churches.

Rooting out the extremist threat posed by Christian nationalism will not be easy. Law enforcement have a large role to play, and after January 6, they seem to be more aware of how bad things have gotten. But just as post-9/11 military, intelligence, and law enforcement tactics have not been enough to address extremism in Muslim communities, they won’t be enough in Christian communities. Christian leaders must embrace the responsibility they have to address the growing extremism in their midst and push back against those who would try to turn America into a theocracy, which would undermine everything that makes America great.

Hundreds of evangelical leaders from across the country and the political spectrum recently released an open letter calling on faith leaders to join upcoming efforts to address the growing political extremism in communities across the country. It’s time that we see the extremism of Christian nationalism for what it is: a threat to the integrity of our religion, and an increasing threat to the safety and security of our country.

As leaders in their communities, Christian leaders have an obligation to push back. They have to start demonstrating the leadership to resist.