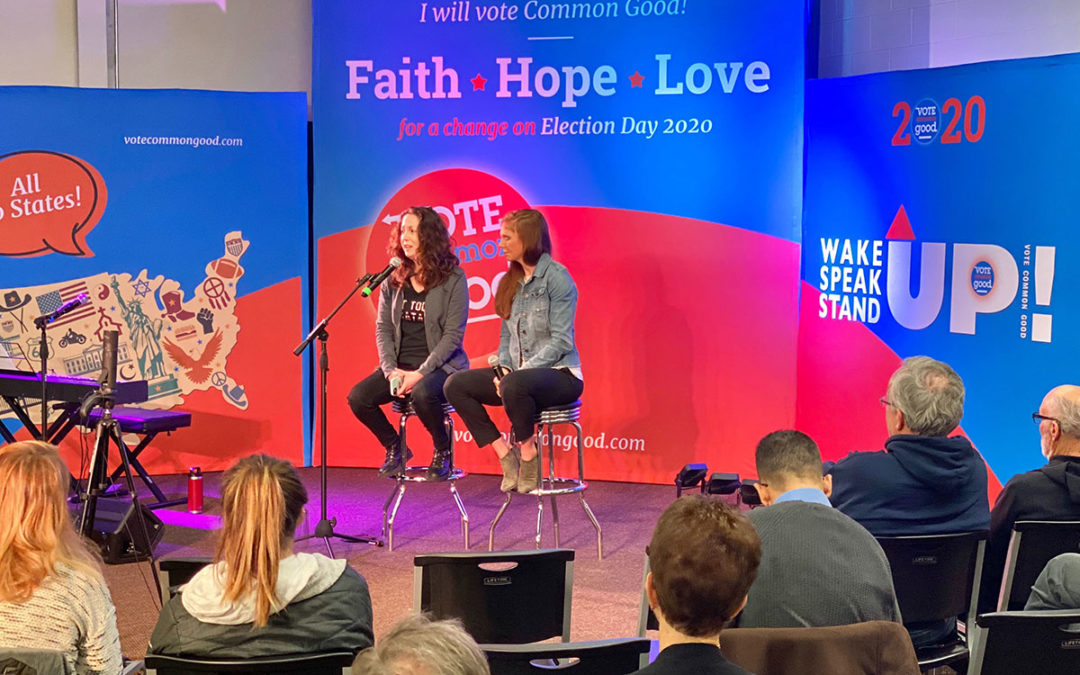 Amy Sullivan at a Vote Common Good event in January.

The following is written in The Washington Post by Amy Sullivan, strategic director of Vote Common Good:

Anyone who has ever attended a Good Friday service knows it is not a joyous holiday. The “good” nomenclature dates back centuries to its use as a synonym for “holy,” and the day is perhaps the most somber and sorrowful one in the Christian calendar, commemorating Jesus’ crucifixion by Roman authorities and the day his followers believed they had lost their teacher and friend forever.

Wishing someone a happy Good Friday is like saying “Happy Pearl Harbor Day!” or “Happy Martin Luther King Jr. Assassination Day!” It demonstrates a recognition that a day is important but without grasping the significance. That was why, even by his own standards, President Trump’s tweet commemorating one of the holiest days of the year for most Christians was jarring. “HAPPY GOOD FRIDAY TO ALL!” read the message, written on the president’s iPhone in his signature all-caps-and-an-exclamation-point style.

For a president who enjoys a high amount of support from white conservative evangelical Christians, Trump has displayed a remarkable unfamiliarity with Christian practice and language and has shown little desire to learn more about the faith of his most ardent followers.

Trump first raised eyebrows — at least for his discomfort in church — during a 2016 campaign stop at an Iowa church when he reportedly tried to put money in the Communion plate used by many Protestant congregations to hold the wine and the wafer that they consume to remind them of the Last Supper that Jesus had with his disciples.

The president is very open about his contempt for the idea of loving one’s enemies, an admonition made famous by Jesus during the Sermon on the Mount and echoed by the keynote speaker at this year’s National Prayer Breakfast. “I don’t know if I agree with you,” Trump complained.

Trump has often cited the two most important lessons he took from his mentor Roy Cohn as “Never apologize” and “If someone hits you, hit back 10 times harder.” So, it probably shouldn’t have surprised people when Trump told a campaign audience in 2015 that he wasn’t sure he’d ever asked God for forgiveness. “I’m not sure I have,” he admitted. “I don’t bring God into that picture. I don’t.” And while he normally refuses to name a favorite Bible verse, one of Trump’s most honest moments may have been when he told a radio host that he liked “An eye for an eye, a tooth for a tooth.

It was a revealing choice, not least because it’s possible no other Christian has ever selected that verse to represent his faith. Most religious scholars agree that Exodus 21:23-25 doesn’t instruct Jews and Christians to hit back against those who have wronged them but instead exists to place limits on the extent to which a person or tribe should demand retributive justice. If someone killed your sheep, you were permitted — but not required — to kill one of her sheep, and nothing more.

Moreover, in the Christian tradition, Jesus explicitly rejects this “eye for an eye” worldview. “You have heard it was said, ‘Eye for eye, tooth for tooth,’” he says in Matthew 5:38-39, “but I tell you do not resist an evil person.” He goes on to endorse turning the other cheek, a highly un-Trumpian action.

Revenge comes naturally to Trump; most recently, he fired the intelligence community inspector general who flagged the initial whistleblower complaint last year regarding a call with the Ukrainian president. He also removed Gordon Sondland, his former ambassador to the European Union, and ousted Lt. Col. Alexander Vindman from his post on the National Security Council after both men testified during the impeachment investigation.

Trump’s very illiteracy or impatience with the basics of Christianity lays bare the extent to which his relationship with evangelical leaders — particularly those in the prosperity gospel tradition — is transactional. Ever the showman, he likes the visual image of pastors laying hands on him in prayer, so he brings them into the Oval Office to do so for photographers. With most of the country staying home since late March due to the coronavirus pandemic, he threw out the suggestion that life could resume by Easter Sunday. “Wouldn’t it be great to have all of the churches full?”

Trump mused on Fox News. “You’ll have packed churches all over our country.” Having pivoted from assurances that the coronavirus would affect no more than a handful of Americans to assertions that anything less than 200,000 deaths would count as a win, Trump is once again itching to declare the pandemic over and throw himself a parade.

But for Christians, one of the lessons of Good Friday — and the vigils of Holy Saturday — is that we must travel through darkness and sit with the grief and stillness before we get to the heart-bursting joy of Easter.

For decades, Republican politicians and conservative religious leaders have been offering a shortcut to morality. They have preached that a good Christian can vote only for Republicans. Therefore, voting for the GOP makes you a good Christian. In their unquestioning, unwavering support for Trump, white evangelical leaders have offered him a similar deal: appoint the right judges and give us the access we desire, and we’ll give you our stamp of Christian approval.

It’s easy to see the temptation to glide past Good Friday, which can be such a downer, and take the express lane to Easter, with its promise of victory over death and a little trash talking. “Where, o death, is now thy sting, huh?” But the shortcut is a mirage. Christians cannot vote their way into good moral standing, and Trump cannot appoint his way to the status of an honorary devout Christian. And we do not get to Easter without the sacrifice and suffering of Good Friday.