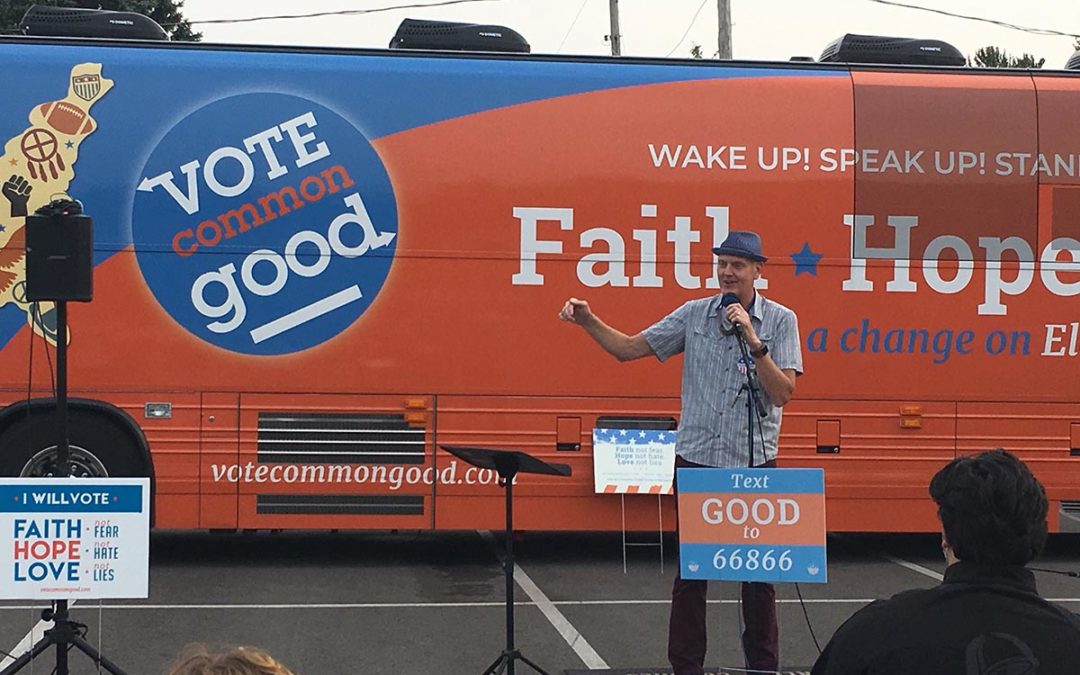 NATIONWIDE – More than 1,600 faith leaders from coast to coast Friday announced their endorsement of Joe Biden in what is the largest group of clergy to endorse a Democratic candidate for president in modern history.

The endorsements, compiled and announced by the faith group Vote Common Good, come from a cross-section of religious denominations, with the vast majority from Catholics, evangelicals and mainline Protestants—closely watched faith communities in the run up to the November election.

“This record-breaking group of endorsers shows that President Trump’s lack of kindness and decency is energizing faith communities and will cost him this election,” said Vote Common Good Executive Director Pastor Doug Pagitt. “Four years ago, many religious voters decided to look the other way and give Trump a chance, but after witnessing his cruelty and corruption, a growing number of them are turning away from the president.”

Many of the endorsers plan to participate in pro-Biden voter rallies, Zoom webinars with clergy to discuss faith and politics, voter engagement trainings for clergy, local campaign consultations and faith voter outreach efforts.

“This historic endorsement is a testament to the effort Vice President Biden has put into engaging communities of faith,” said Faith Engagement Director at Biden for President Josh Dickson. “It’s also a sign that the common good values of the Biden-Harris agenda are resonating with voters motivated by faith. We know that Joe Biden and Kamala Harris are the clear moral choice in this election. We hope this show of support will encourage other voters of faith to make their values, not party affiliation, their primary voting criteria this year.”

Despite the conventional wisdom that Republicans have a monopoly over religion in politics today, many voters of faith feel alienated from the Republican Party. There are increasing signs that religious voters are turning away from the president. Vote Common Good recently released a survey of evangelical and Catholic voters in key battleground states showing President Trump’s perceived lack of kindness is driving faith voters away in large enough numbers to potentially affect the outcome of the election.

The Presidential Candidate Vice and Virtue Poll surveyed 1,430 registered voters in Florida, Michigan, North Carolina, Pennsylvania and Wisconsin and found an 11-point swing among evangelical and Catholic voters toward the Democratic candidate, Vice President Biden and away from the Republican, President Trump as compared to 2016.

The results of VCG’s survey reflect a similar trend seen in polls by the Public Religion Research Institute in July, which showed a seven-point drop in white Christian support for the president; and an August Fox News poll that showed Biden at 28 percent support among white evangelicals—12 points more than Hillary Clinton received in 2016.

Below are statements provided by some of the endorsers:

Reverend John L. McCullough, President and CEO of the Church World Service: “Joe Biden has an elegant understanding of the principles that America strives toward. He believes in the inherent goodness of people, and doing the necessary hard work to be successful. Joe genuinely has a warm heart and a caring spirit.”

Ronald Sider, President of Evangelicals for Social Action: “I urge everyone, especially evangelicals, to support Joe Biden as President. Poverty, racism, lack of health care and climate change are all “pro-life” issues.  On those and many other issues, Biden is much closer than Trump to what biblical values demand.”

John Kenneth White, Professor at Catholic University of America: “More than 210,000 Americans have died from a virus President Trump did little to stop. Parents have been separated from their children at the southern border, some never to see them again. Donald Trump bullies opponents on Twitter. Meanwhile, Pope Francis calls us to ‘seek the common good,’ and the Catholic Bishops echo his appeal for a ‘civilization of love.’ Joe Biden summons the better angels of our nature. He is a good, decent, faithful man. The Catholic case for Joe Biden is clear.”

Belinda J Bauman, Executive Director of One Million Thumbprint: “So much of what I value as a firmly pro-all-of-life, church loving believer is on the ballot this November—public health and poverty, racial injustice and violence against women, access to education and economic opportunity, care for creation, migration and our witness in the world as a nation are all there. So is our faith. Considering these issues in light of ‘do not kill,’ ‘do not lie,’ and ‘love your neighbor’ have helped me decide to vote my conscience, ticking the box for Biden/Harris. In all my years I’ve never publicly endorsed a candidate. But this year is different—very different. This year we don’t just face a political choice, we face a moral one.”

Reverend Elizabeth Rios, Founder of The Passion Center: “Jesus is not on the ballot, but many of the things he valued are. While some can continue to be one-issue voters, ignore the mismanagement of the biggest public health crisis in our lifetime killing Black and brown people disproportionately, and essentially cast a vote for profits over people,  hatred and division. I will cast a vote for the America I know we can be, with a president that honors the imago Dei in all people and will support policies that care for my neighbor, as we all seek the welfare of our cities. My faith compels me to vote for the candidate who will think of and speak for the powerless not just the powerful, who seeks to bring out the best in the American people not the worst. For me the choice is clear, that candidate is Joe Biden.”

Since August, Vote Common Good has led a swing state bus tour aimed at inspiring voters of faith to make the common good, not political party, the determining factor in casting their 2020 ballots. The group launched its tour with a nine-day, 115-mile pilgrimage for racial justice from Charlottesville, VA to Washington, D.C., where its members rallied outside the White House at Black Lives Matter Plaza before joining with the Rev. Al Sharpton’s March on Washington.